Adventures in color printing! After working with one tone of black ink for most of the semester, I was quite excited to work in color. I used three separate aquatint etched plates, each designed to deposit varying amounts of red, yellow, or blue ink to create this simple poppy design. 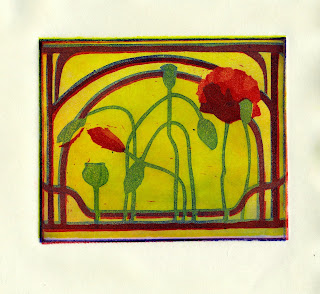 The assignment was inspired by color newspaper comics, like the special Sunday edition that most newspapers have. As a kid, I looked forward to those sheets all week (then I suppose I discovered webcomics, after which all bets were off)

Did you know that all the colors on those richly tinted pages are printed in pure red, yellow, blue, or black ink? The overlay of the primary colors allows for the illustration of the entire rainbow, plus the addition of grayscale shading. Sure, it's pretty much kindergarten level color theory, but it surprises me every time.

Here was a fun exercise in layering colors for shade and intensity:

In the 3x7 grid below, I used multiple applications of light watercolor washes in either red, blue, or yellow. the top row is all one layer, the second is 2, and the last is three layers, creating the most intense colors. in layering these simple pigments, I was able to achieve red, orange, yellow, green, blue, violetish, and a dark sort of grey. The intention of this exercise was to illustrate how the layering process achieves multiple tints without directly mixing colors. 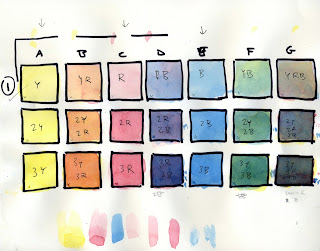 Following the basic aquatint process, I was able to make three plates, each with 3-5 levels of tint depth. if I were to print a single plate, I would be left with white areas as well as several gradations of color. See the Multi tonal aquatint entry for more details.

The plates were designed so that I would have pure yellow areas in two tones, three tones of red laid over yellow, two shades of green made from the overlay of yellow and blue…. &c &c, you get the picture.

In theory, this process should allow me access to the entire rainbow, as well as the full range of color saturation. In reality, this is a pretty time intensive process- not only did I have to design and etch each plate, but each final print required the consecutive printing of first the yellow layer, then the red, then the blue. More often than not, something would go wrong on one of these steps and I would have to start again. The most common issue was registration, which was the process of lining up each plate to match the previously printed image. You can see how the final blue layer did not line up very well with the yellow and red in the final print above- unfortunately, I ran out of patience time after finally pulling an acceptable print.

Exciting times! Next up, an exploration of symmetry in math and art.