Final prints: Beardsley-inspired design and a bit of symmetry

The last of the prints!

Here we are, several weeks post-graduation. I had a fantastic time with this printmaking class, and it will stand out as the only art class I had the time to take while I was at Reed. Au revoir, Portland and Reed college; it was lovely to know you.

I have now moved to DC, and I'm back in the metalshop! It's a bit like being a kid in the candy store, except with a slightly higher chance of losing a finger. I have loads of projects I'd like to share with you, dear Internet, but let me close up the printmaking business first. 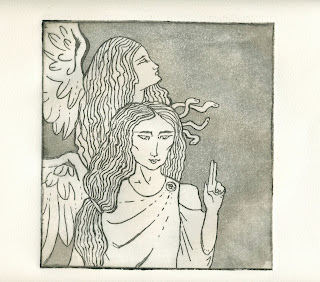 More behind the cut

Above was my final print, which I barely finished in time to pass the class. I won't lie- it was, err, a little hurried. The design was based off of a print by Aubrey Beardsley, with whom I am completely fascinated. I took the simple route on this one by first painting a layer of hard ground resin over the blank plate, then scratching through to expose the zinc using a wooden stylus. Using the stylus, I was able to achieve far greater line quality than with the fine metal points I had been using. After selectively removing resin in some areas, I dunked the plate in a 4:1 nitric acid bath for a few minutes, deeply etching in the design. The medium tone background was the result of aquatinting selected areas and lightly etching a stippled texture into the background. The resulting rough texture on the metal picked up and held onto pigment during the inking process, depositing it on the wet paper to create the final print that you see above.

Below is another project, my second-to-last project. The prompt here was "symmetry", a restriction that I found to be exceptionally irritating. After going through multiple designs and trashing them all, I found a very interesting paper (Radmila Sazdanovic, published in Symmetry journal 2012) about diagrammatics in art and mathematics, and was struck by the complexity and elegance of a certain image. 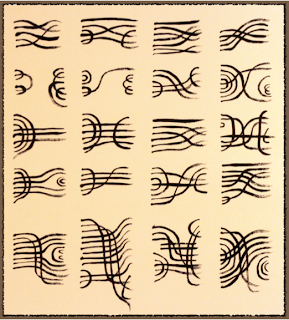 The shapes above are diagrams of basis elements in categorification of the hermite polynomials, drawn with sumi ink by Hiroko and Ritsuko Izuhara. Though not specific to symmetry as a mathematical concept, this interpretation of diagrammatics represents an excellent example of the fertile overlap between mathematics and art.

"These diagrams will have a fixed number of right endpoints and an arbitrary number of left endpoints. On the leftmost diagram corresponding to the projective modules, all possible connections between left and right endpoints are allowed, and as we are moving to the right, we introduce additional restrictions. The diagrams in the middle can not contain right returns (arcs connecting one point on the right to another point on the same side), and the diagrams on the very right also can not contain intersections between arcs connecting left to one of the endpoints on the right." (Sazdanovic, 2012)

As I am not a mathematician, I am not in any position to get into the details of the actual math behind these modules. I was, however, inspired enough to integrate the design into a perfectly symmetrical print design. 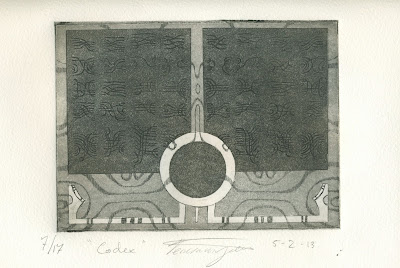 Sadly, this print it one of the only ones I would consider a failure. Despite carefully etching the module diagrams into the metal, I over-etched the background and reduced the contrast significantly. In an attempt to salvage my work, I also made several negative prints by simply rolling ink onto the surface of the plate and printing straight from that. As a result the recessed areas are visible, but at the cost of the finer details. Had I more time, I might have experimented with different printing techniques in an effort to bring out the labor-intensive details. 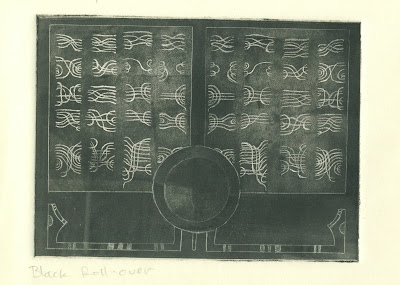 And that's all there is! My thanks go out to my classmates and most of all to my professor Michael Knutson, whose patience and understanding made it possible for a busy science major to take a long-coveted art class. Seriously, I was astounded at how cool he was about me being late, nearly missing the final, and taking off in the middle of class to go babysit my labwork. Mad props.

Up next: I have no intention of abandoning this blog. Now that I'm back to working at the metalshop here in DC, I have plenty of projects to share with you all. Coming up in the next few days I will tell you more than you could possibly want to know about Lost Wax casting, and a demonstration on how to repair the holy grail.
Posted by Tess Myers at 7:12 PM