About two weeks ago, I posted photos and a description of a puzzling device on Facebook, and offered anyone the chance to guess how it worked. Here's the original problem (edited for clarity), with the explanation after the jump.

This beautiful coffee engine (circa 1850) came into the shop today for repairs. The owner didn't know how it worked or if it ever had, so I had the pleasure of tinkering around with it to determine the mechanism. Anyone want to see if they can guess how it works? 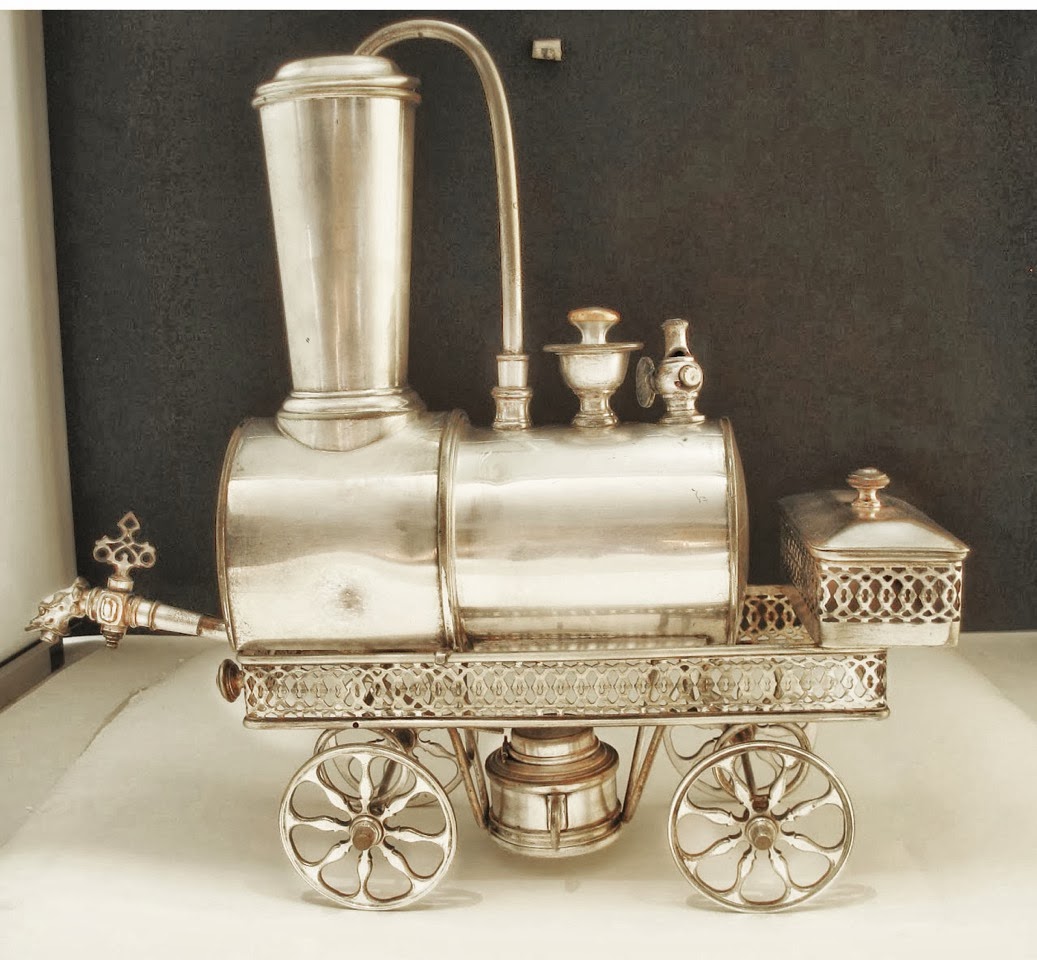 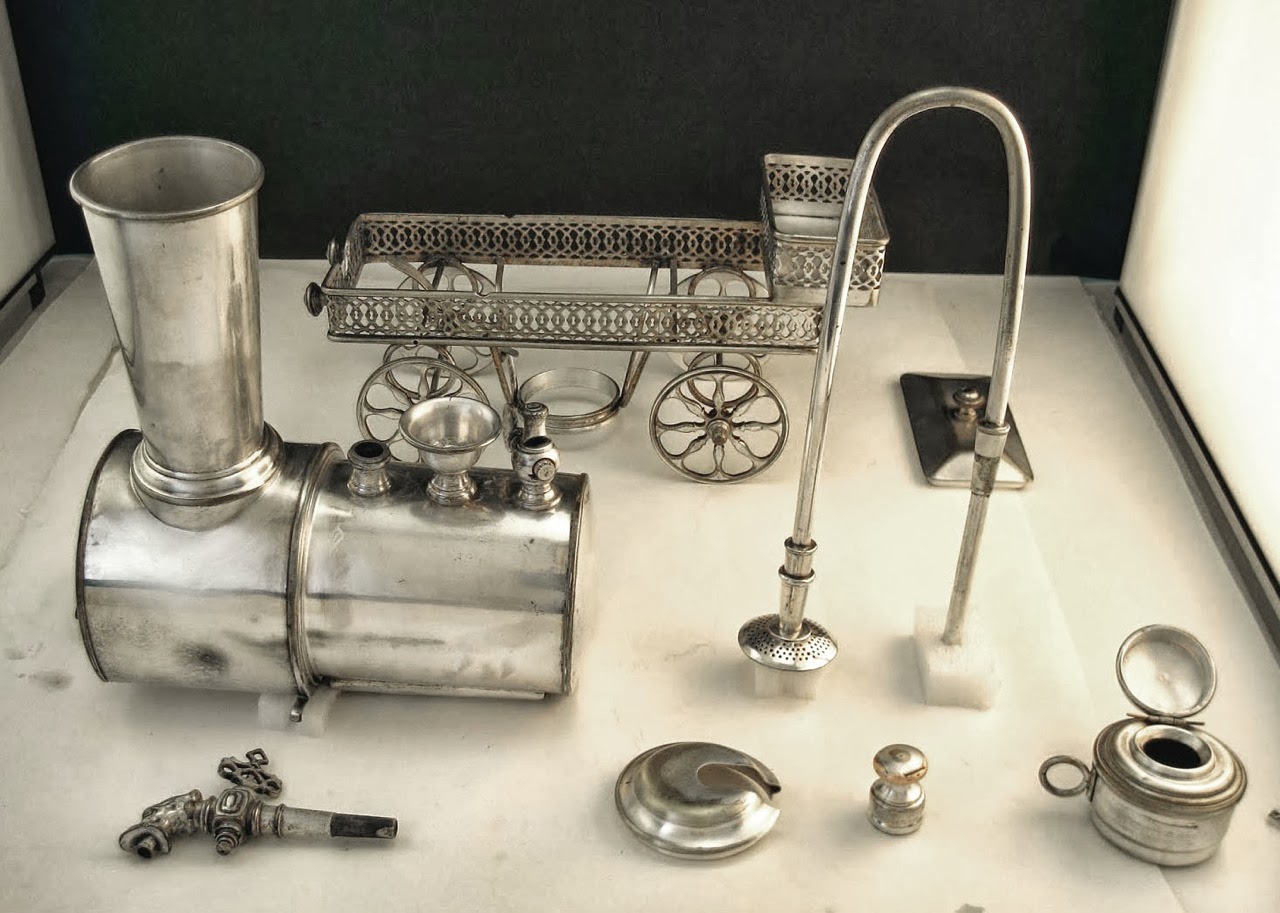 Some important details: There are two chambers that liquid can go in. The front chamber (Left, towards tap) is completely closed off except for the chimney, and does not seal. It does not directly connect to the other chamber, nor the tap. The rear chamber has (left to right) a tight connection to the U- shaped tube spout, a stoppered funnel to pour water into, and a whistle with a valve that closes.

The u- shaped tube spout is open all the way through, and ends with a perforated strainer. The strainer does not open like a tea ball.

The engine ensemble (both front and rear compartments) balance on the carriage in  such a way that it may rock back and forth slightly, though the rear is much heavier. Below the carriage is a spirit lamp with a hinged lid, and when the engine rocks forward it pops a small lever to flip the lid closed.

There is a small box on level with the engine, probably for holding dry tea/coffee grounds. It is not involved in the mechanism.


This type of coffee maker is called a vacuum/siphon machine, and it's more complicated than it looks. 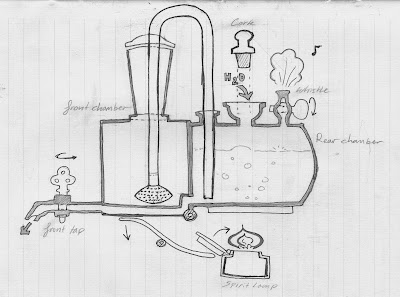 First, you place water (I have it calibrated to 800 mL) in the rear chamber through the central funnel, open the whistle valve, and put coffee grounds in the front chamber (Figure 1). Once the spirit lamp is lit, the water begins to heat. As the water boils, the steam expands (PV=nRT, baby!). The rising pressure in the sealed rear chamber begins to push boiling water through the spout into the front chamber where the dry grounds sit, brewing coffee much like a bialetti espresso maker (Figure 2). 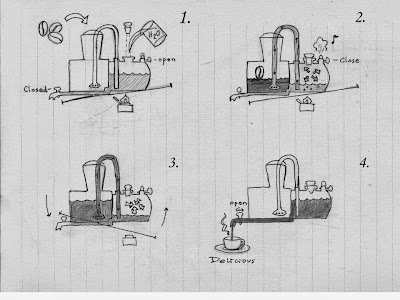 Once 800 mL have entered the front chamber, the weight causes the engine to tip forward on its axis, pushing a small lever to flip the lid of the spirit lamp closed and extinguishing the flame.

Now we have coffee in the front pot, but no way to get it out short of dismantling the whole thing and dumping it. Not too elegant, really. Here's where things get fun. As the rear chamber cools, the gases contract (Figure 3). Within about a minute, all the coffee from the front chamber is sucked back into the rear chamber, leaving the grounds behind and knocking the engine back into its original position.

Now, delicious hot coffee can be released from the front tap. Yum.

A few more tidbits dug up from the depths of the internet:

And  a very interesting ceramic model on Retronaut
Posted by Tess Myers at 4:18 PM